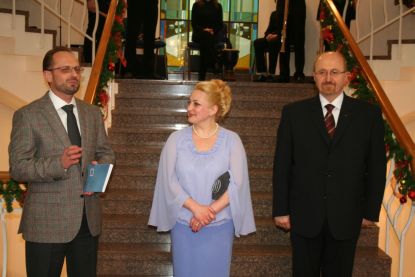 January 19, 2011 the Intercultural Dialogue Center and the Ukrainian Embassy in Belarus organized presentation of the collective book “Preservation of the National Originality in the Context of Development of the Intercultural Dialogue” with participation of the head of the UN Office in Belarus Antonius Broek, head of the EU Delegation to the Republic of Belarus, Jean-Eric Holzapfel, heads and representatives of 17 European countries, diplomatic missions, government, business, Christian groups, renowned scholars and artists, public figures, representatives of the media.

Those who were present at the presentation hailed the foreign author – the head of the UN Office in Belarus Antonius Broek, Chargé d’Affaires of the USA to Belarus Michael Scanlan, Chargé d’Affaires of the Republic of Poland to Belarus Witold Jurasz, Ambassador Extraordinary and Plenipotentiary of Israel to Belarus Eduard Shapiro, Ambassador Extraordinary and Plenipotentiary of the Slovak Republic in Belarus Marian Servatka, Cultural Counselor of the Embassy of Ukraine in the Republic of Belarus Vasily Bondar and other reputed persons.

Impeccable professional competence and personal support of the Ambassador Extraordinary and Plenipotentiary of the Ukraine to Belarus Roman Bessmertniy, the collaboration of the whole Ukrainian Embassy and Centre allowed to hold in fact a diplomatic reception in accordance with the highest international standards. The meeting drew a wide positive responce and was highly appraised by both Belarusian and international communities.

During the presentation, they discussed ways to strengthen the cultural identity as a basis for constructive intercultural dialogue, determined  ways of a further development of the issue in an international dimension, which will bring together the intellectual, artistic, spiritual and business elites in the dessimination of knowledge of Belarusian culture, consolidation of the modern Belarusian society .

As noted by Roman Bessmertniy, by the way, who made a speech in Ukrainian, Belarusian-Ukrainian cultural dialogue has deep historical basis and is based not only on the similarity of our mentalities and ideologies, on the possession of the common Polesye region, but also on the need to take into account each other’s experiences in the preservation of a folk , traditional part of our national culture.

Chairman of the Supreme Coordination Council of the Republican Confederation of Entrepreneurship Vladimir Karyagin drew attention to the fact that business and culture as crucial factors of the building of civil society now require a special support for their development.

Initiator and host of the event Liubou Uladykouskaja noted that intercultural dialogue is possible if the subjects of dialogue are present – the national cultures themselves, which, in turn, require solidarity, which is a basis for individual freedom, and democracy which is a basis for freedom of society. On the other hand, intercultural dialogue should be understood as a dialogue between different groups of people, with their inherent attitudes and beliefs, and as a right itself to existence of different, another. Intercultural dialogue is such an open and respectful exchange of views, that leads to a better understanding and perception of others, and thus, to a peaceful, frictionless solution of various problems, is a basis for the democratic way of international communication. Intercultural dialogue implies the existence of equal opportunities, including equal dignity, voluntary commitments, open-mindedness, willingness to take into account both common and individual, at least minimal knowledge of each other, an ability to find a common language for understanding the differences and respect for them.

The dialogue between cultures as a fundamental model of democratic communication, which is opposed to violence and teaches us to live peacefully and constructively in a multicultural world, serves as a means to reach a consensus and avoid a conflict through respect for the human person and all manifestations of his creativity. Intercultural dialogue contributes to social solidarity, tolerance, it does not allow a spread of fanaticism and isolation that can lead nations to running wild.

The participants of the event pointed to especially a caring, intimate atmosphere that prevailed during the meeting, that became possible uppermost due to the exhibition of the Belarusian masters of folk art – the weaving was represented by Natalia Kononovich, straw work by Elena Papkouska, folk wood carving by Dmitry Zaitsev, figuline and clay work by Sergei Naranovich – and due to perfectly matched repertoire of the flutists’ group «Brevis» under the direction of Pavel Suragin.

Intercultural dialogue has taken place. And will continue to. 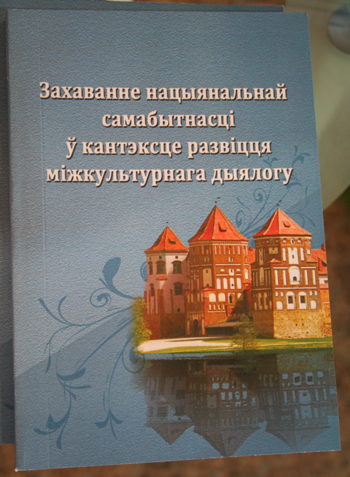 The cover of the book presented